Laminitis, often referred to as “founder”, is a term that triggers fear in many horse owners. The problem can be life-threatening, and currently accounts for almost 2% of the horses referred to The Atlanta Equine Clinic for treatment. Laminitis is defined as inflammation of the laminae of the foot.

What are LAMINAE?
Laminae are finger-like protrusions of tissue. In the equine foot, there are 2 types of laminae: sensitive (dermal) laminae and insensitive (epidermal) laminae. These two types of laminae interdigitate with each other to form a bond that is responsible for holding the hoof wall onto the horse’s foot. It is very similar to the mechanism by which our finger nail (insensitive) is attached to our finger (sensitive). Each foot contains approximately 600 primary laminae. Each primary lamina, in turn, contains approximately 100 secondary laminae. Laminae in the horse’s foot undergo significant shear (A) and distractive (B) forces as a result of weight bearing.

How do laminae become inflamed?
There are many predisposing factors that trigger the onset of laminitis. Regardless of the original cause, however, compromised blood flow is thought to be involved in the final pathway that eventually results in laminar inflammation and pain. This becomes an important consideration when determining an appropriate course of treatment for laminitis. Predisposing factors for laminitis include:

Mechanical founder is a term that refers to loss of laminar integrity in the absence of initial vascular and/or metabolic compromise within the foot. Most horses experiencing mechanical founder are not lame; however, delamination and rotation of the third phalanx within the hoof capsule is apparent. 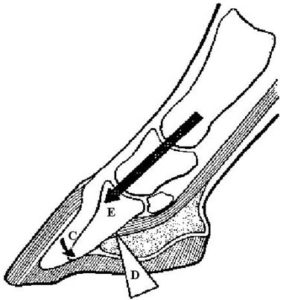 What are clinical signs of laminitis?
The most obvious sign of laminitis is lameness. Since the horse normally bears more weight on the thoracic (front) feet relative to the pelvic (back) feet, clinical signs are typically worse in the thoracic feet. In most cases, only the thoracic feet are involved. In these cases the horse will often place the hind feet well up under the abdomen and the front feet forward with the weight on the heel of the foot. If all four feet are involved, horses will usually carry the front feet back and the back feet forward to create a very narrow base of support. Lameness is usually very apparent when turning the horse in small circles on a hard surface. Degree of lameness has been characterized by the following criteria:

Grade 1:
The horse will alternately lift the feet at rest. The horse is sound at a walk but a shortened stride is noted at the trot.

Grade 2:
Horses move willingly at a walk, but the gait is shortened. A foot can be picked up without difficulty.

Grade 3:
The horse moves very reluctantly and resists picking up a foot.

Grade 4:
The horse refuses to move but is willing to stand.

Grade 5:
The horse is unable to stand.

What are the PHASES of laminitis?Heat is often present over the coronet band and/or hoof wall, although this finding is extremely variable. There is often an increased digital pulse and heart rate. Horses may be anxious in more severe cases.

The developmental phase is initiated when the horse experiences or comes in contact with one of the predisposing factors. A horse that just finished a large bag of grain but is not yet exhibiting lameness would be considered to be in the developmental phase. This phase ends at the onset of visible lameness.

The acute phase begins at the first appearance of lameness and lasts until one of two things happen: 1) the passing of 72 hours without physical or radiographic evidence of delamination (or the breakdown of the laminar interface) or 2) digital collapse (rotation and/or sinking). This phase can last anywhere from 24 hours (in severe cases) to 72 hours.

The subacute phase of laminitis begins after clinical signs persist for longer than 72 hours and there is no clinical or radiographic evidence of digital collapse. The duration of this phase is highly variable. During the subacute phase, the foot attempts to recover from damage incurred during previous phases. This can therefore be considered the “healing phase” of laminitis. Some horses will not experience the subacute phase and move directly into the chronic phase from the acute phase. Others may remain in the subacute phase for an extended period of time.

Horses enter the chronic phase of laminitis when they experience mechanical collapse of the third phalanx, regardless of when it occurs. This phase may last for an extended period (months, years, life), and is characterized by persistent lameness and/or a diverging growth pattern within the foot (multiple lines or “rings” on the hoof capsule).

What are the goals of treatment?
In some cases, horses have been exposed to one or more of the predisposing factors of laminitis but have not begun to exhibits clinical signs. During the developmental phase, therefore, the goal of treatment is prevention. Although the horse may never develop laminitis, aggressive (preventative) treatment is important to counteract the effects of biomechanical and/or metabolic derangement(s) before they occur. Once abnormalities exist, they are more difficult to treat.

The primary goal of therapy during the acute phase of laminitis is to normalize the laminar environment and prevent further deterioration of the laminar bond. This is attempted by decreasing pain, reducing inflammation, and minimizing mechanical stress to the third phalanx while enhancing blood flow to the foot. Undoubtedly, horses that do not demonstrate laminar separation and digital collapse within 72 hours are more likely to experience full recovery.

In the subacute phase of laminitis, the goal of therapy is designed to reestablish normal laminar integrity and strength, thus avoiding progression into the chronic phase. The horse’s response to corrective trimming/shoeing usually dictates the duration of time that they spend in this phase.

Rehabilitation is the main focus of treatment during the chronic phase. Some horses never fully recover from this phase and must be managed their entire remaining lives. As might be expected, collapse of the third phalanx changes the operative pathologies and mechanical properties within the foot considerably. Consequently, mechanical support of the foot, vascular integrity of the laminae, general metabolism, growth abnormalities in the hoof wall, and foot pain are important issues in regard to appropriate therapy during this phase.

What does treatment for laminitis involve?
In order to treat laminitis effectively, we must: 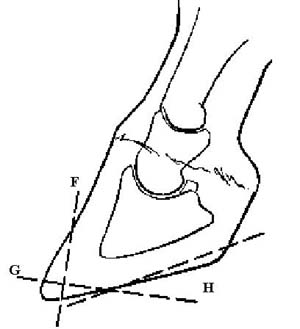