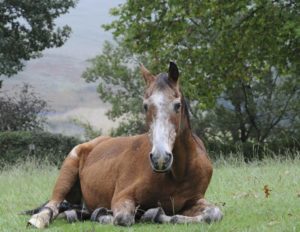 In horses, PPID is attributed to an adenoma (a benign tumor) in the pars intermedia of the pituitary gland. The cells that make up the tumor produce excessive amounts propriomelanocortin (POMC) and adrenocorticotropic hormone (ACTH). One unanswered question in horses is what exactly causes PPID in horses – is it a spontaneous pituitary disease (primary) or is it a consequence of loss of dopaminergic innervation (secondary)? Dopamine is a hormone secreted by the hypothalamus which regulates secretion of POMC and ACTH by the pars intermedia of the pituitary. The excessive secretion of these peptides leads to perpetually increased adrenal secretion of cortisol (hyperadrenocorticism). Cortisol is the physiological glucocorticoid in the equine species. Excessive cortisol circulating in the body potentiates catecholamine (adrenaline) release and accounts for the myriad of clinical signs associated with the disease. 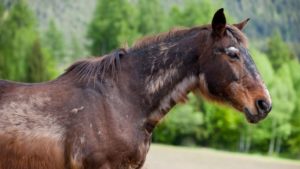 The classic sign of Equine PPID is the long hair coat that fails to shed (hirsuitism). Up to 2/3 of patients with PPID develop the tendency for excessive sweating due to the thermoregulatory response of a long coat. Some horses exhibit increased water intake and urination. Weight loss, muscle atrophy or loss of topline and lethargy and/or poor performance have also been noted in the horses with PPID. Equids with PPID also may exhibit signs of delayed wound healing and have a tendency towards developing secondary infections, including skin infections, foot abscesses, conjunctivitis, sinusitis, gingivitis, pneumonia, etc. Chronic, insidious onset laminitis is the most significant clinical complication of PPID in horses (50%).

PPID as a risk factor for laminitis is two fold: 1) impaired perfusion of the hoof by excess catecholamines acting directly on vascular smooth muscle (vasoconstriction and limited blood flow) and 2)indirectly by excess cortisol circulation causing insulin resistance (inhibiting glucose uptake by the cells in the hoof = no energy). The structural components of the equine hoof (lamellar keratinocytes) have an exceptionally high glucose requirement. Maintenance of the structural integrity of the hoof relies on glucose delivery to and uptake by these cells. So if the cells of the hoof “starve” because they are not getting glucose into them for energy, laminitis ensues.

Excess cortisol production can also cause insulin resistance by inhibiting the action of insulin on cells. This promotes the availability of glucose for cells that do not depend on insulin for glucose uptake (nervous system). Glucose toxicity can occur with these cells and cause the release of additional enzymes that cause further constriction of the blood vessels and also impair perfusion in the hoof, possibly leading to the development of laminitis.

Diagnosis of PPID
Endogenous ACTH level: A single blood sample may be all that is needed to detect an elevated ACTH level and is diagnostic for PPID. Because of the daily normal fluctuation of the hormone, we could receive a normal value on a horse that actually has the disease. In a case where we are highly suspicious of PPID but the ACTH level is normal or in the upper range of normal, we recommend a TRH Response Test.

TRH Response Test: Pituitary adenoma cells seem to lose receptor specificity for hypothalamic-releasing hormones. In most cases, corticotrophs (ACTH-producing cells) are abnormally stimulated by TRH (thyrotropin-releasing hormone), causing increased ACTH production by the pituitary pars intermedia. With this test, a blood sample is drawn initially and 1 ml of Thyrotropin Releasing Hormone (TRH) is administered. A second blood sample is drawn 10 minutes later. The ACTH level is measured in each sample and a 3 fold increase is diagnostic for PPID. 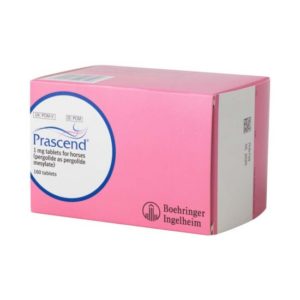 The most effective ways to manage equine PPID and its associated side effects is through diet and administration of an oral medication one to two times daily for life. The medication of choice is a dopamine agonist called pergolide mesylate (Prascend). This medication acts like dopamine and suppresses the excessive secretion of ACTH and POMC. The FDA approved product is supplied as a pill form, called Prascend, in 1 mg tablets that readily dissolve in a very small amount of water and can be administered via a syringe or stuffed in a treat (carrot, piece of apple). There is a broad dosage for horses and usually they are started at the lowest dose (1 mg) for management. Transient anorexia is observed in less than 5% of horses that take the drug, but this typically passes in the first week.

Dietary management consists of a low sugar/low starch diet (low glycemic index) supplemented with adequate vitamins, minerals and protein. Limiting grain meals by the use of ration balancers; limiting pasture access, especially during spring and fall; and providing high quality forage is recommended. If additional calories are needed to maintain adequate body weight,a low glycemic index feed and /or supplementation with vegetable oil in the form of corn, rice bran, cocosoya or canola oil may be recommended. Start by adding ¼ to ½ cup once to twice daily and increase as needed, not to exceed 1 cup twice daily.

**look for feeds with no more than 33% starch and sugar

** grain intake should be limited if not totally restricted