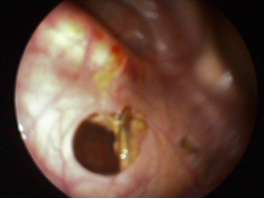 ROXIE was admitted to the South Shore Equine Clinic & Diagnostic Center on March 20, 2010, after being evaluated in the field for a puncture wound to the left throatlatch region, just below the linguofacial vein. ROXIE was coughing and there was dried blood in both nostrils; therefore we were concerned that a foreign body had penetrated much deeper structures than could be appreciated from palpation alone. Further diagnostic evaluation at the clinic would help better ascertain the full extent of her injuries and allow for more intensive monitoring and treatment. 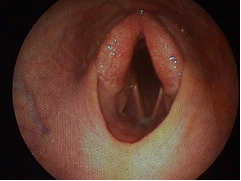 Dorsal Displacement of the Soft Palate

Upon arrival to SSEC, ROXIE was slightly depressed, and aside from an elevated rectal temperature, and intermittent cough, her general physical examination was normal. The puncture wound was treated with copious lavage of betadine and saline solution, as the area was grossly contaminated with debris and hair. To further investigate the full extent of the wound and trauma to surrounding internal structures, upper airway endoscopy was performed. Endoscopy revealed persistent dorsal displacement of the soft palate (DDSP), feed material in the larynx and proximal trachea, and three holes in the medial compartment of the left guttural pouch (GP) due to foreign body penetration. The guttural pouch was copiously lavaged and a large amount of hair and debris was removed. A tract could be followed with the endoscope from the holes within the guttural pouch that communicated with the outside puncture wound. It was clear that ROXIE’S injuries were extensive and that she required aggressive management. Due to the penetrating injury, ROXIE also suffered extensive nerve damage (because the nerves run through the guttural pouch); primarily to the glossopharyngeal nerve (involved in the swallowing reflex) and to the hypoglossal nerve (involved in tongue movement). Because these nerves were compromised, ROXIE could not eat or drink on her own without the risk of this causing secondary aspiration pneumonia (feed material going into the trachea and lungs). 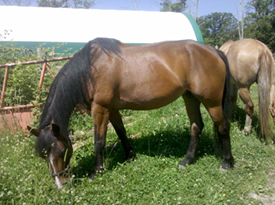 ROXIE’S treatment plan consisted of wound lavage and debris removal via the endoscope as well as the placement of an indwelling nasogastric tube to allow for frequent feedings of Equine Senior® gruel with electrolytes and corn oil. She was also administered antibiotics, anti-inflammatories, and gastroprotectants. We also closely monitored her hydration level and kidney function often. ROXIE did develop a minor secondary complication from the indwelling nasogastric tube. Her nasal mucosa became very irritated due to pressure necrosis. However once the tube was removed, the mucosa quickly healed.

Intermittently throughout hospitalization, we allowed ROXIE to eat grain, hay or grass to assess her swallowing function. Initially the dysphagia (inability to swallow) was too severe; however as time went on and her persistent DDSP resolved (as evidenced via repeated endoscopy), she was slowly able to resume eating small amounts of feed. Although the ability to move feed material to the back of her mouth and swallowing function were greatly improved, she was still not 100%. We last performed upper airway endoscopy on May 7th, which revealed that the guttural pouch was 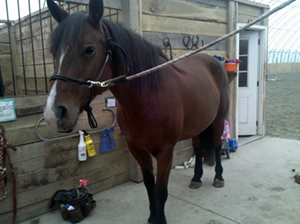 ROXIE responded well to treatment and was discharged from the hospital on May 11, 2010 (6 ½ weeks after her injury)! ROXIE’S injuries were severe and extensive, and at that time, it was unclear whether or not she would make a full recovery. Because this type of injury is unique, there was no way to predict if the nerve damage she suffered would fully recover; although it had significantly improved since admission to the hospital. By June 2010, ROXIE was able to drink and eat all types of feed without coughing or feed material coming out of her nose. Her owners were thrilled with the positive outcome, as the original wound was entirely healed, she had regained nerve function and was slowly gaining weight back that she had lost while hospitalized. As you can see here from her latest photo shoot, ROXIE is a true success story at SSEC, and one special patient we will never forget!