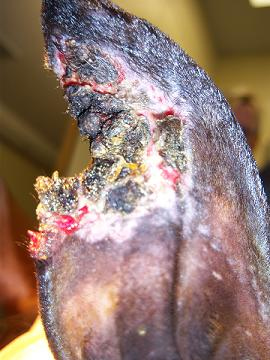 Duckie is a 19 year old warm blood used for Dressage. His left ear had progressively become more and more disfigured with a skin tumor. In addition, he was getting more difficult to halter and bridle, as he did not like the ear touched. After exhausting numerous topical treatments, the owner elected to try LASER surgery to remove the tumor.

Duckie was brought to the clinic and had the procedure performed by Dr. Reilly as an outpatient. Under sedation and local anesthesia to the area, Duckie remained standing for the entire procedure. The CO2 laser produces an invisible beam of light that vaporizes the water normally found in the skin and other soft tissue. Because the surgeon can precisely control the laser, only a thin layer of tissue is removed, leaving the surrounding areas unaffected. Layer after layer of diseased skin was removed with the Carbon Dioxide LASER leaving behind healthy tissue. The LASER causes Less Pain as Laser energy seals nerve endings as it moves through tissue. Your horse feels less pain post-operatively. It also causes Less Bleeding as the laser seals small blood vessels during surgery which allows the surgeon to perform surgeries with extraordinary precision. This also speeds some procedures, reducing the need for anesthesia. The LASER also causes Less Swelling-as Laser energy does not crush, tear or bruise because only a beam of intense light contacts the tissue.

Duckies ear after surgery, with a protective layer of salve

By using the LASER your horse has Reduced risk of infection – The laser sterilizes as it removes diseased tissue, killing bacteria that cause infection. Plus the surgeon has Precision – The laser can remove unhealthy tissue while minimizing adverse affects to healthy surrounding tissue. And your horse has a much Quicker return to normal activities – Recovery is rapid and there is less post-operative discomfort. 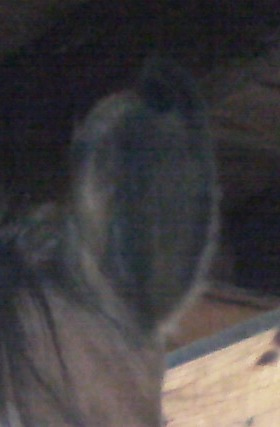 After the procedure, a salve was placed on the ear once daily for one week, and after waiting one week it was repeated. Today there is no remnant of the tumor and Duckie does not mind anyone touching his ear. Other than a slight defect and curl to the tip of the ear, Duckie’s ear is as good as new!

Your horse’s health is as important to us as it is to you. We are pleased to offer LASER surgery as an exciting new option for safe, comfortable treatment. LASERs have been successfully used on humans for over 30 years. This human experience is proving to be beneficial for horses and their owners. It presents a host of benefits over traditional surgery, and in many procedures, the LASER can replace the scalpel entirely. We are pleased to be among the first veterinary practices to offer laser surgery specifically for horses.

What Types of Procedures Can a Laser Perform?

A laser is ideal for a wide variety of surgical procedures for horses. Laser surgery can correct many common conditions such as cysts, tumors, warts and infections that may occur around the eyes, ears, in the mouth, and anywhere on the skin. Specialized internal procedures, such as soft palate and epiglottal surgeries are now performed with the laser. We also commonly use the CO2 LASER for our castrations and can then use suture to close the incision site. This allows horses to get back to a normal routine much faster and also means their owners do not have to do daily flushing and cleaning of any open wounds.