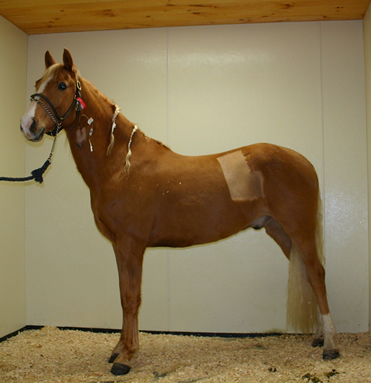 Sunny was seen at SSEC for colic

Sunny was seen as an emergency at his farm for a bout of colic late one morning. He had been uncomfortable the previous night, but passing small amounts of manure. His exam showed him to have normal gut sounds, normal heart rate, and a normal rectal exam. He had also received 2 doses of Banamine in the last 24 hours. There was no reflux of gas or fluid when a nasogastric tube was passed, so a gallon of mineral oil as well as electrolytes and water were administered through the tube.

Sunny appeared to be comfortable for a few hours, but then became quite painful. He had not eaten and had not passed any manure. After discussing the case with the owner and trainer, the owner informed us Sunny was not a candidate for colic surgery. Sunny was admitted to the clinic early that evening for further diagnostics and a complete colic work-up.

Upon arriving, Sunny was noted to have abrasions over both eyes from rolling, his heart rate and respiratory rate were slightly elevated, and his temperature was normal. He had no gut sounds on the left side of his abdomen, but did have some on the right side. Sunny was sedated and a nasogastric tube was again passed into his stomach. Excess gas and gastric fluid was retrieved with gastric lavage, indicating delayed gastric emptying and/or outflow obstruction. A rectal exam was performed revealing only scant amounts of manure; otherwise the exam was considered within normal limits. The tube was left in place so we could continue to lavage his stomach and empty any excessive gastric fluid. An intravenous catheter was placed and intravenous fluid therapy was initiated. He was given one liter of hypertonic saline, followed by ten liters of lactated ringer’s solution. Initial blood work revealed an elevated white blood cell count indicative of inflammation and/or infection. His muscle enzymes were elevated, most likely from his discomfort and rolling. A blood lactate level was done and found to be slightly elevated indicating decreased oxygen (perfusion) in Sunny’s organs. An ultrasound exam of his abdomen showed a normal nephrosplenic space, a common place for displacements to get caught. The ultrasound exam also showed distended loops of small intestine with decreased contractility; indicating a physiologic obstruction with fluid build up. An abdominocentesis (“belly tap”) was negative for obtaining any excess fluid which bathes the abdominal organs.

Sunny’s would try to lie down as his tranquilizers would wear off. Therefore, his discomfort was managed with frequent doses of sedatives and pain killers every 45 minutes while the work-up continued. Sunny was started on intravenous antibiotics three times a day, continuous fluid therapy and a constant rate infusion (CRI) of lidocaine, a local anesthetic. The lidocaine CRI is done with a automated fluid pump and is helpful in managing the pain in horses with anterior enteritis and ileus, thus promoting normal gastrointestinal contractions and movement. He was maintained on the IV fluids and the lidocaine CRI overnight, continuously monitored with the help of the stall video system. The gastric lavage was repeated at four hour intervals throughout the night.

The gastroscopy revealed grade 2 (of 3) ulceration of the non-glandular part of his stomach at the junction of the glandular part (margo-plicatus). There were numerous grade 1 excoriations as well as some isolated deeper areas.

Sunny was discharged on the morning of day three with normal manure, a great appetite, and medication to control the ulcers in his stomach (Gastrogard), as well as recommendations for dietary changes and exercise schedule changes.

Equine Gastric Ulcer Syndrome (EGUS) is now a widely recognized problem affecting up to 90% of horses in training. The ulcers are the result of the erosion of the lining of the stomach due to a prolonged exposure to normal acid in the stomach. Horses were made as grazers; therefore their stomach continuously secretes acid to help with digestion. A horse which is not eating regularly (each hour of the day) is more apt to develop ulcers as a consequence of acid buildup without feed to neutralize the pH. High grain diets, stall confinement for prolonged periods, stress (environmental and physical), hauling, showing or racing, training, strenuous exercise, and chronic administration of non-steroidal anti-inflammatory drugs (bute, banamine) can all contribute to the development of ulcers. Treatment is aimed at decreasing the cause (feed practices, exercise routines, stress levels), and using proton pump inhibitors (Gastrogard) to decrease the number of cells secreting acid in the stomach.

Sunny was reported to be doing very well two weeks later. His appetite and manure have been normal, and his attitude has improved. We expect him to continue to do well, provided his dietary and exercise recommendations are maintained.