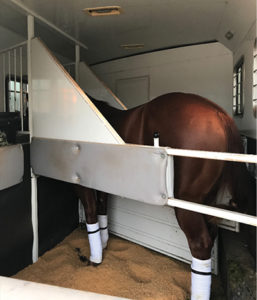 Even if you never plan to take your horse off your property, it is important to teach them to load and trailer well.

A horse without this training can be a danger to his handlers and himself should an emergency occur that requires transport. If an illness or injury makes it necessary to transport him to an equine clinic, a struggle while loading could worsen a horse’s condition, cause injury and/ or lead to serious complications. Or in the case of a natural disaster, you may be required to evacuate quickly – think of how terrible it would be to leave your horse behind because he would not load.

Misbehavior during transport also puts horses at risk of injury or worse. Accidents happen, even under the best of circumstances. But you are asking for trouble by hauling a horse along with another who is known to kick or scramble in the trailer. The close quarters make it impossible for horses to evade flying hooves, and a swift kick can cause bruises or even broken bones. In addition, horses who dance around, jump from side to side, scramble in place, or lunge back and forth, can make the ride stressful and bumpy for their companions.

In short, there are plenty of resons to train horses to load and travel properly, and NO good reason not to.

Click Here to view photos from the Safe Trailering Clinic

Failure to load: Four principle factors play in a horse’s reluctance to load;

1. Dark interior of the trailer
2. Insecure footing
3. Fear of new surroundings
4. Prior unpleasant experiences with trailering.

In solving a loading problem, one should attempt to habituate the horse to the loading process to overcome its natural phobias, and to avoid association with unpleasantness.

In an immediate problem, horses responsive to touch can be coaxed by gentle prodding with a lunge whip. It is important not to whip a horse into a trailer, as this often reinforces fear on loading. A better approach involves pushing the horse on the trailer by using ropes crossed behind the horse. An “easy loader” might also be loaded first as an example.

The best solution may take up to a month. The horse and trailer are moved to a paddock, and all the horse’s food placed on the trailer ramp. Over a period of days, the food is placed further into the trailer until the horse is loading itself. Eventually, the horse should be led into the trailer to eat. Very few horses will starve to death rather than enter a trailer. If the exercise can be repeated in a strange paddock, the lesson will become generalized and the problem minimal or resolved entirely.

A final, but most expensive, alternative is to invest in a rear facing trailer. In contrast to conventional front-facing trailers, the horse loads into a well-lit trailer and experiences more normal “ground movement” during transport.

You arrive at the show, open the trailer gate, and find “Scout” lathered and out of breath. The trailer was noisier than usual, the ride rougher, but the problem stopped at each pause in the journey. He’s been “scrambling”…

Horses scramble during transport because they lose their balance, or more commonly, are afraid they will. A horse that learns to lean against the trailer during the transport does not need to scramble, and has a much more relaxing ride. A horse that does not learn this maneuver, or is transported in a trailer with a few or weak supportive rails, needs to scramble to maintain his balance, especially through turns.

A rear-facing trailer often solves this problem since the horse can plant itself in a natural “stopping” posture. The center partition can be removed from a conventional trailer to allow the horse to establish a wider stance. Sometimes, merely changing drivers helps, since we all have different driving styles. Rarely, stray voltage from a brae wire may be the cause – the behavior will be associated with activating the particular circuit involved.

Desensitizations and counter conditioning can be attempted by loading the horse and starting the engine. If the horse remains calm, he is given a food reward. This process goes on to include short drives, and finally, highway travel. Unfortunately, success with this method is not always to be expected.

Finally, make sure there is good footing for each and every ride. Sprinkle sand or shavings on the trailer floor if it is slick or will become slick during transit. This may well prevent scrambling on the first ride.