Lisa was having a problem with one of her horses. “Shyanne” was a bit off for the last week, but had now become very sore footed. Lisa called the day before a forecasted hurricane and was worried she may not be able to get someone to come out. On the day Lisa called the clinic, her horse was moving very gingerly in both front feet. Her other horse had been diagnosed and treated with Lyme disease previously, so she was concerned Shyanne may now be infected. South Shore Equine Clinic veterinarian on-call, Dr. Stratton was dispatched to her farm.

Shyanne was very sore on her feet; they were warm and had increased pulses indicating inflammation. Lisa’s biggest fear was that her horse now was suffering from laminitis from the infectious Lyme disease. Dr. Stratton noted Shyanne was very resistant to move and seemed very uncomfortable. Both feet were blocked which gave Shyanne almost instant relief. After discussing the likelihood of Lyme disease causing the symptoms, Dr. Stratton performed a 4DX SNAP test which proved Lisa right, it was positive for Lyme disease. Lisa made the decision to forego x-rays of the front feet and decided to start treating for Lyme disease as aggressively as possible.

The 4DX SNAP test is a species independent test, meaning it can be used on any species. The Lyme test portion looks for the C6 antibodies against Borrelia burgdorferi, the causative agent for Lyme disease. These C6 antibodies are only made by the infected animal when there is a current LIVE infection. After successful resolution of the infection the test will decrease markedly; most often resulting in a NEGATVE test in as few as 60 days after the treatment had been concluded. The test is much for sensitive and specific for accurately diagnosing Lyme disease than measuring titers. The test is also nearly equivalent to the human gold standard, the Western Blot Analysis, but less than ½ the price!

Dr. Stratton started Shyanne on diluted intravenous oxytetracycline. The feet were also cleaned and packed with supports for added relief. The next day, Sunday (the day of the hurricane), Dr. Stratton returned to find Shyanne much improved. The second dose of intravenous oxytetracycline was administered and the foot supports were left in place. On day three, Dr. Reilly attended to Shyanne for the next treatment and found Shyanne was almost back to herself and moving around so much she had dislodged her foot supports. She was walking well, turning well, and now had no heat or digital pulses in her feet! This was only the second day after starting treatment! 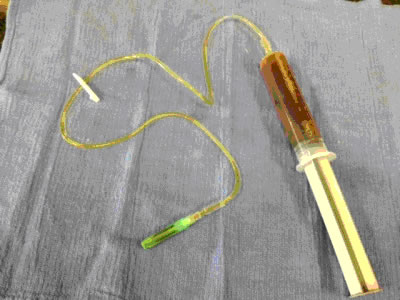 Shyanne went on to finish her treatment regimen concluding with oral oxytetracycline for a few weeks. She is now back to herself, and full of energy. Lisa told us, “Shyanne is feeling 100% better since her Lyme treatment. I also was unaware that horses can have the same reactions to Lyme disease that people do, as I also was infected and had the same soreness and other feelings Shyanne had.” Lisa went on to say, “Shyanne seemed to recover much quicker than I did, probably due to South Shore Equine Clinic’s fast and knowledgeable staff. They don’t just stick with old school methods. Thank you.”

Lyme disease can be a very frustrating disease to deal with. As this is a bacterial infection, antibiotics are the basis of treatment. As reported in horses in a study performed at Cornell in 2003, 100% of infected horses were completely cleared of Lyme disease infection by using intravenous oxytetracycline. The study also compared two other antibiotics, doxycycline and ceftiofur (Naxcel); only to find that both were only 50% effective at removing the infection. We also know that doxycycline is poorly absorbed by the horse, and extended treatments may be necessary in order to utilize the horse’s immune system to rid the disease while the doxycycline keeps the infection in check. In the study at Cornell, re-infection was common in both the doxycycline group and Naxcel group, but not the oxytetracycline group.

Our treatment protocol utilizes intravenous oxytetracycline daily for 5 to 10 days and then uses a form of oral oxytetracycline for 2 additional weeks. Most horses (and their veins) can accommodate this treatment protocol without the use of intravenous catheters. Our success rate for achieving negative test results after treating is almost 90%. Reasons for the less than perfect test results are threefold: re-infection (as horses return to their areas of infection); incomplete treatment (owners unable to or horses unwilling to complete the oral treatment); or incomplete resolution, but still a greater than 50% reduction in circulating C6 levels (as the SNAP test only records color –although it can vary from faint to dark blue).

As the injected antibiotic chelates (or grabs) circulating calcium, it must be diluted and given slowly to ensure the heart and skeletal muscle do not have any problems. A typical treatment takes 3- 5 minutes. Also, it is not a treatment for untrained professionals as the antibiotic can be irritating to veins if not administered so that the entire dose is completely within the vein.

This protocol takes into consideration that intravenous oxytetracycline ONCE daily is superior to oral doxycycline or intramuscular Naxcel twice daily. This is due to higher tissue concentrations of oxytetracycline compared to low levels of oral doxycycline. Those that did respond to doxy or Naxcel in the Cornell study showed a significant decline in antibody level during treatment but also showed antibody levels increased after treatment was discontinued in 75% of each treatment group.

1. These two drugs appear to inhibit reproduction of, but not eradication of B. burgdorferi
2. Doxycycline also has potent anti-inflammatory effects which may allow horses to show improvement in their lameness signs regardless of the drug’s effect on the organism.

We have tested almost 1,400 horses with the Lyme SNAP test over the past 6 years. We have had 452 positive test results. This is an infection rate of 33%, which would correspond with nationwide statistics for Lyme endemic areas. Of those testing positive, we have treated approximately 400 of them. We have rested 98 horses at the conclusion of treatment plus 60 days. 86 of 98 have re-tested negative; which would equal a success rate of 87.8%. Although not quite as high as 100% in the experimental study performed at Cornell, it is still quite a bit higher than their results for other treatments.

The likelihood of a horse receiving any immunity to a future Lyme infection is very slim. Rather, efforts need to be placed on reducing the likelihood of getting bitten by ticks carrying Lyme disease. Avoiding tick habitats and reducing the white footed mouse population are the only proven methods of disease reduction.