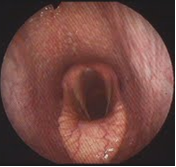 Normal Larynx as seen through an endoscope

Mambo is a 17 year old QH gelding. He has been healthy and exercised routinely as a pleasure and trail horse. His owner noticed a cough that persisted for over a week while eating, riding, or just getting up in his stall. A new shipment of hay was blamed, but the cough didn’t seem to improve with soaking the hay. Physical exam findings, as well as blood work (a CBC and fibrinogen) were within normal limits. Mambo was prescribed oral antibiotics (SMZ tabs) and an expectorant (organic iodide powder). A follow-up call one week later reported that the medication had made no difference in the quality or frequency of the cough.

At this point, a recommendation was given to the owner for an airway endoscopy to determine where the cough may be coming from. Mambo came to the clinic 2 days later where all his health parameters were still within normal limits; there was no nasal discharge, no cough on tracheal palpation, and clear lungs when taking deep breaths. After exercising on the lunge line for ten minutes and then given 10 more minutes of time for grazing, an airway video endoscopy was performed. Without any sedation, a flexible, fiber optic endoscope attached to a video camera is passed up one nostril and advanced to see the nasal area, the throat, and ultimately down into the trachea.

We were surprised at what we saw through the endoscope in Mambo’s throat, or larynx. (See pictures Pre-op1 & 2 and compare to normal larynx picture)

Pre-op 1 picture shows this to be an entrapped and ulcerated epiglottis. The epiglottis should be resting on top of Mambo’s soft palate and function to help close off the airway whenever he drinks or eats. Unfortunately, the tissue around the epiglottis (the aryepiglottal folds) had engulfed the epiglottis, restricting its ability to function normally. In addition, there were ulcers on this thickened tissue, indicating it had been there for some time. Mambo would also intermittently displace his soft palate dorsally (but could easily replace it with swallowing), which may be contributing to the thickening and ulceration of the tissue. Pre-op picture 2 shows the soft palate being displaced on top of the epiglottis.

Luckily, this is a curative condition. Based on our findings, we advised the best solution for Mambo would be LASER correction of the epiglottal entrapment. This surgery can be done under sedation in the standing horse using a Diode Laser. A 600um fiber is passed through the channel in the endoscope in order to vaporize and dissect free the underlying epiglottis. (See Intra-operative pictures 3 and 4)

The abnormal tissue was very thick and had numerous ulcerations and adhesions to the underlying epiglottis. After freeing the tissue, the normal tissue could be visualized. The rostral, or front, tip of the epiglottis appears blunted which could be the reason for the entrapment, or could be the result of long standing adhesions to the entrapped tissue. (See Immediate post-surgery picture 5)

Mambo was placed on stall and small paddock rest for 4 weeks. He was also prescribed systemic anti-inflammatories and daily throat spray to help with the inflammation in his throat. Two days later, a recheck endoscopy showed the epiglottis to be in a normal position, and most of the inflammation to be subsiding. (See 2 day post surgery picture)

At the recheck examination one month later, the endoscopy showed a normal pink color to his throat, normal positioning of the epiglottis and soft palate, with a small defect at the rostral tip of the epiglottis, but with normal healing. (See 4 weeks post surgery picture) 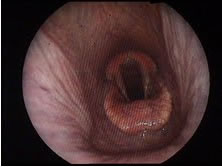 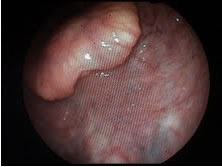 Mambo was reported to be doing well and back to his normal self. A slow return to activity for the next 2-4 weeks was prescribed in anticipation of Mambo and his owner enjoying the rest of a completely normal life!