The number one killer of horses is colic.  Colic is not a disease, but rather a combination of signs that alert us to abdominal pain in the horse.  Colic can range from mild to severe, but it should never be ignored.  Many of the conditions that cause colic can become life threatening in a relatively short period of time.  Only by quickly and accurately recognizing colic – and seeking qualified veterinary help – can the chance for recovery be maximized. 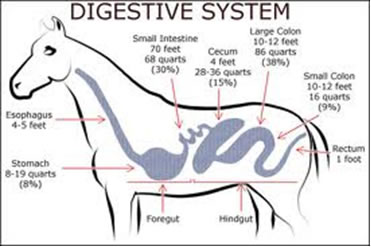 While horses seem predisposed to colic due to the anatomy and function of their digestive tracts, management can play a key role in prevention. Some horses will appear to colic more frequently than others. Horses that have had colic surgery are also more likely to colic that a horse who has never had surgery. Many factors can be eliminated or reduced in horses that often colic. Special attention to particular individuals as well as techniques for the entire barn can be undertaken to reduce the incidence of colic. Although not every case is avoidable, the following guidelines from the American Association of Equine Practitioners (AAEP) can maximize the horse’s health and reduce the risk of colic:

Virtually any horse is susceptible to colic.  Age, sex, and breed differences in susceptibility seem to be relatively minor.  The type of colic seen appears to relate to geographic or regional differences, probably due to environmental factors such as sandy soil or climatic stress.  Importantly, what this tells us is that, with conscientious care and management, we have the potential to reduce and control colic, the number one killer of horses.

Adapted and reprinted with permission from the American Association of Equine Practitioners.